Skip to main content
Decarcerate PA is on the radio! Tune in every Saturday at noon at WPEB 88.1FM !

This week we had a prerecorded interview with some of the Hearts on a Wire Collective talking about their campaigns, report on trans and gender variant people in Pennsylvania prisons, and the newsletter they send inside prisons. The Voices from the Inside segment featured poetry from the Sylvia Rivera Law Project Prisoner Advisory Committee Blog.

For more information, check out: www.facebook.com/hearts.wire

This week we had Brendan (from Youth of Philadelphia Organizing for Power) and Marianna from Boat People SOS talking about their efforts organizing in Vietnamese community, their work with PCAPS, chasing Corbett out of Philly, personal family experiences of seeing the effects of immigration policies, Philadelphia's recent victory against ICE holds, why juvi sucks and a Voices from the Inside segment from DPA/HRC insider Shakaboona.

Thomas Dichter is on this week's Decarcerate PA radio! He's been a militant in our ranks from early on and has come on the show to talk about the historic roots of mass incarceration. Thomas gets into the failures of the first penitentiaries, connecting the dots between movements, quantifying dehumanization and the transition from slavery to the current system of racist mass incarceration and the reimagination of freedom. HRC's Shakaboona chimes in via Prison Radio for our Voices from the Inisde segment.

This week Theresa Sullivan and Hannah Zellman (pictured above) rep their innovative prison entry organization work the Institute for Community Justice. They talk struggles of coming out of prison with HIV, mentoring prisoners to become community organizers and activists, Prison Health news. fighting to ban the box, and much more...

It's been 2 years since the murder of Trayvon Martin by George Zimmerman, an incident that exposed deep racism both in still alive on the streets as well as our justice system. The "not guilty" verdict was a slap in the face to thousands of young black men just like Trayvon who would in any similar circumstance have faced inevitable long sentences or a death penalty and in response thousands took to the streets to demand justice, but also as an urgent affirmation of the value of black life.

For this show we have Khadijah Costley White, an anti-racist community organizer teaching at Rutger University and Sarah Giskin from People Utilizing Real Power who are both involved in organizing events to remember "Trayvon and all the young people harmed by police officers, security guards, and vigilantes and fueled by a system of racially coded violence against people of color." 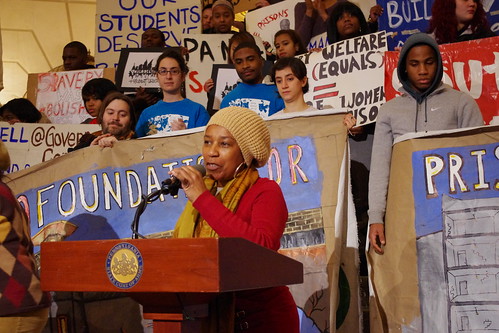 If you couldn't make it to the People's Hearing, listen to the recap on Decarcerate PA radio. We featured some of the speeches and interviews of people that attended. Listen to the voices of the testifiers in Harrisburg.

Derrick Stanley, the only member of the Dallas 6 currently on the outside spoke with us about the case, conditions in solitary confinement and about their protest against inhumane prison conditions for which they've become a symbol of resistance.

In this show we featured a recording from teh presentation of the book Resistance behind bars by Victoria Law, hosted by the Global Womens's Strike. Resistance Behind Bars provides much-needed documentation of collective organizing and the daily struggles inside women's prisons. This powerful new edition includes two new sections that examine the challenges facing transgender, transsexual, intersex, and gender-variant people in prison as well as their acts of resistance, and many other recent and ongoing stories of resistance and organizing by women prisoners.

For more information check out http://resistancebehindbars.org/

The Philadelphia Student Union was started in 1995 by a group of young people who were concerned about not receiving the quality of education that they deserved. They decided that if school reform were going to be successful, it would have to involve students as leaders for change. The organization has grown from the dream of a few students to a strong organization that has allowed students themselves to become a major force for improving schools in Philadelphia.